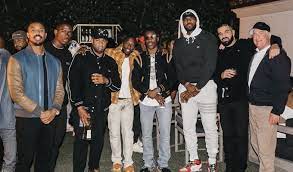 The NBA made a very quiet yet impactful decision this weekend that almost no one is talking about and that's the decision not to suspend Lebron James for breaking covid-19 protocol. The league made a business decision and i don't blame them. If this was someone lower on the roster or someone from the coaching staff, you better believe they would have made an example out of that person loud and clear. The question you may be asking is which rule did he break? What did he do? Last week LeBron attended a promotional event for a tequila brand for which he is an investor before the Lakers' play-in tournament game against the Golden State Warriors. We all know players who fail to comply with the league's health and safety protocol are subject to warnings, fines and suspensions. Let's be honest there was no way to know who is vaccinated and who isn't at a party like this. According to ESPN's Adrian Wojnarowski the violation didn't rise to the level of suspension. If you are vaccinated that isn't public record unless you choose to share. Reports from the league office say the attendees had to show proof of vaccination. According to Dennis Schroder who accidentally let it slip during an interview, James isn't. So clearly, he attended a party not vaccinated and without a mask in a crowded space with less than six feet of separation. How do I know all of this you may ask? Was I there? Did I have an insider at the party? No fool, this motherfucker posted pictures from the party all over Instagram. Not only did he pose for a gang of pictures, but he also invited two of the people from that party to sit courtside at the game two nights later. Don't get me wrong if you're going to have guests let them be Michael B. Jordan and Drake that's good company if you can get it.

The league's actions are a perfect example of the saying that there is an exception to every rule, no matter the person or the organization. The NBA would never keep their biggest star out for ten days with a chance of them being bounced in the first round. The business of basketball had outweighed common sense long before covid became an issue. The question we should be asking is why the fuck would LeBron do something that stupid. James is on his way to competing for the fifth title of his career and to put that in jeopardy because of a launch party tells me all i need to know about what he thinks his team's chances are of winning the title this year. The days of zero dark thirty James are clearly long gone and have been replaced with tequila dark thirty.

In all seriousness, I hope LeBron is vaccinated. The number of people he has to talk to in a week may be more than some people do in a year. People who have the celebrity he has are a walking super spreader event. That's without adding Drake, Jordan and Kylie Jenner to the mix. We all have had to do a little more than we would like to when it has come to keeping each other safe. Please keep that going and let's get past this thing. We have lost more than a half a million people alone in this country lets try not to lose another one. Let's toast to the start of the NBA playoffs anybody got some tequila?