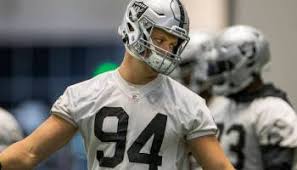 Carl Nassib is gay and i dont give a shit

Carl Nassib coming out on Instagram to the world is a proud moment for that young man, and I'm happy he can now live a public life as a gay man. To that, I would say in the most respectful way I can. I don't give a single shit! What was stopping this young man from leading the life he was? He said he's not doing it for attention, and he just wants to continue to be a private person. If his intent was to keep his sex life confidential, telling the world he was gay wasn't the best idea. When making an announcement, you call attention to the very thing you want to keep private. I have to admit I don't know the pain and stress he must have gone through trying to decide to come out to the public and the world of football. Guess what I hope no one gives a shit! This man's sex life won't make him more popular it will simply make him a target. Why is it people think telling their business will make their life easier? A life lesson learned is the fewer people involved in your personal life, the better it may be. I will say again, if he thinks this will lead to a better life for him and his partner, that's all in his right and will to do so. I, on the other hand, think that's a giant lie. If Carl thinks he can just go back to pass-rushing like some unknown number 99, he is dead wrong. An active gay player, not trash like Michael Sam, will be asked to represent every gay person in America.

The weird thing about people saying they don't want attention. Is by saying you don't want attention means oftentimes you will get more attention than you expected. This man won't be met with bigotry in the public eye because most Americans are past thinking gay men and woman are somehow less than the next man. He won't find slurs painted in his locker or hate overwhelming his inbox. Now don't get me wrong, he will get some of the latter because there's one in every crowd. In the anonymous world of social media, cowards always seem to find a way to get retweeted. This story shouldn't be news. Who someone chooses to sleep with is their business. It always has been and should always be that way. Announcing his sexual preference won't make him run faster or beat a block of the edge any better than he did before. I'm more concerned that the raiders are his third team in five years, and in fourteen games last year, he only managed to come away with two and a half sacks. So I don't give a fuck about him being gay. I care if he can sack the quarterback! That should be the only concern of anyone who hears about this nameless man's open confession. I wish him the best. I hope he has a long nameless career because, like he said that all he wants. Only time will tell if he will have his wish granted!