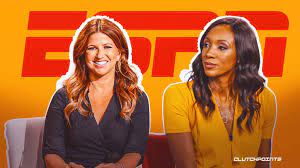 Say it ain’t so Rachel

The NBA is buzzing with the breaking news surrounding the finals with the Suns and the Bucks. Sike the only people who care about these finals are the ones who live in the cities or collect a paycheck from what is happening around those cities. The NBA crowd is all a fuss because of two people who will never score a point in the NBA finals. Well, according to reports someone did score last year but off the court. In my best 30 for 30 voice, what if I told you the basketballs dribbling in Jimmy Butler’s room wasn’t basketballs at all? They were Rachel Nichols ass cheeks! Yea I know it sounds crazy right. The NBA is full of rumors and things of that nature. Like the time people were saying Jay Williams banged Erin Andrew’s while at Duke. That’s not why you're here today.

Today’s Rachel Nichols news comes from my favorite segment of the media world. The Hot Mic! The Hot mic has given us classics threw-out broadcast ages. From Obama to Trump from Bill O’riley famous “fuck it we will do it live” Casey Casum even was caught on a hot mic blasting people at work. The hot mic has many victims. From the most green to the grizzled vet. Rachel was most recently heard on a hot mic blasting current ESPN coworker and host of NBA countdown and many other things. She called Maria Taylor out for being a token hire due to the Black Lives Matter movement and social unrest that had overcome the country.

Maria Taylor thas said not to be taking any calls from Rachel and nor should she. If that’s how Rachel feels why should Taylor be forced to now listen to a crocodile tear-filled apology. The question at hand is did she get the job because of her talent or because people were burning cars across America. Am I a fan of Maria’s work? Not really. Do I love “The Jump” which is hosted by Nichols not really. Taylor has her detractors. It would appear to many she just got the job because she was the next up-and-coming black woman at ESPN. The idea that she got the job because she’s black would lead to questions of how Katie Nolan got the job at ESPN? How Michele Beatle was one of the highest-paid people at ESPN. I can do this for a long time with ESPN but I won’t. Regardless of how this all shakes out, I will say this is about as ugly as you can get. Women in the sports media world have enough battles to fight. Turning it into a circular firing squad won’t help.

Since we may now be living in a time where no conversation had near a phone or camera is private. When you vent in what you think is an intimate space. Sometimes the content of what you are saying will get lost on people as the number of voices grow in the conversation. This was the case here. To many people heard a woman upset because she lost out on an opportunity to a younger, prettier woman in a business where your looks will be what gets you out of the starting blocks. I don’t blame Rachel for her anger nor do I for the comments. All I will say to her is own what you say and no hot mic will ever be able to burn you again.