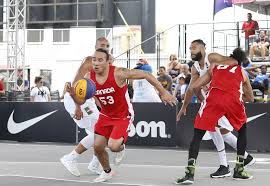 This ain't the NBA

Man I had a crazy sports weekend and I think I need to set the record straight on a couple things. The Olympics are back! I had no idea I liked fencing until I watched the Americans take gold. Due to the sporadic nature of the programming, the next thing up was 3 on 3 basketball. Here are the rules.

The basics and rules of basketball carry over into the 3-on-3 format. Dribbling, shooting, rebounding and defense remain the core tenets — and players must be able to excel in all phases of the game. With rosters set at four players per team, versatility is critical and substitutions/rotations are frequent.

3-on-3 is played on half of a regular basketball court. The shot clock is set at 12 seconds, half of the 24-second clock in the NBA and much lower than the 30 seconds in college basketball. And the game hardly stops after fouls or made baskets.

There is no tip-off. Instead, a coin flip decides first possession. Winners are determined by the first to 21 points or whoever is leading after 10 minutes. If the score is tied after 10 minutes, overtime will be played — the first team to score two points wins.

That sounds pretty fundamental right. Well, it sure the fuck wasn't! I loved it! The battles in the Olympic 3 on 3 remind me of the fights I grew up playing. The addition of the short shot clock and the time it's played under was indeed what made me watch more of this than the actual men's team, who I will get to in a bit. Watching these dudes dive, crash and push each other had me on the edge of my seat. It made the ice cube 3on3 look fat, slow and outdated. I would watch this on tv way before I watch corn hole or any of that other shit they put on ESPN in the summer. The funniest part is watching the ringers show up at the Olympics. Poland has a black guy representing their country. The damn man is from Tennessee and is black as me playing for Poland. I encourage you to find it where you can on your tv and enjoy it. If you love basketball, it is a pleasant surprise.

What the fuck is going on with Team USA hoops?

I know everyone is asking the same question, what is wrong with Team USA? After watching them lose 3 games this summer, I would tell you nothing is wrong with them. They're not a good team. What you have grown accustomed to seeing is NBA basketball and this isn't it. The team is built with good NBA players and not good international players. The rules are slightly different but what is more telling is the style is different. Gone are the days of the players being in awe of the red white and blue. This isn't 1992, where Angola was asking for autographs during free throws. Most of these guys play in the NBA. I'm not ready to start a five-alarm fire about what we need to do to fix this. The truth is this isn't that important to our country. We sent our best player while other countries sent their best player and the best players to put around them. We didn't do that. Kevin Durant is the world's best player, but his team's guys don't fit his skillset like the guys on Argentina or France.

Team USA is filled with borderline all-stars who many have huge holes in their game. Dame can't guard, Draymond can't score bam is too small and Zach Lavine never has won anything in a team setting in his NBA career. Not to mention some of these guys on the roster seem like they were at the airport and the team just decided to bring them because they were tall. For instance who the hell is Cam Johnson. When your claim to NBA fame is the greatest blooper generator in bloopers' history of bloopers then Javale McGee is your guy. This team was bound to have struggles based solely on its composition. The winner in this run of Team USA will be the NBA. Take a look at the final results from this season. The breakout star proved to be Luka from Slovenia. The MVP was Jokic from Serbia and the champion and finals MVP was from Africa. The fact that there are better TEAMS than ours isn't, nor should it be a surprise. What started in 92 has now come to blossom as what you see on the world stage. The rest of the world is playing basketball and they are getting better by the year. Don't get me wrong, I think Team USA will figure it out and find a way to win going forward but if they don't I won't be the one telling you I'm shocked! I will be the one telling you this was bound to happen.