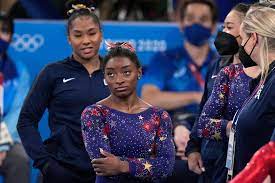 SHE QUIT IT'S TIME WE ADMIT THAT

How did we get here? We may need to start referring to this generation as they sharing and caring generation. I may need to change the way I see young athletes. I may need to is what it means to be tough. I may need to rethink the American athlete? Maybe I'm in the wrong and behind the curve it's happened before. Perhaps I'm wrong I'm willing to admit that. I really am ready for someone to tell me im out of touch with a solid explanation as to why. Because what this Simone Biles situation has turned into really has me looking around the room and asking the simple question of is this is what it's come to.

Is this the everyone gets a trophy generation all grown up. Every kid has to play in the game. Are we in the beginning stage of all the kids raised playing sports with no score because everyone's a winner bullshit finally coming back to bite us? America is changing in a lot of ways. The general public that watches the Olympics does so with pride and a level of admitted ignorance. We don't watch swimming, volleyball or woman soccer for that matter at any time during our sports calendar. Still, when we commit during the Olympic cycle we go all in. The best example for myself was I had no idea there was a 3x3 in the Olympics. The first thing I sat and watched from start to finish was an American fencer win the gold. To act as if I'm some gymnastics expert with knowledge is just not true. One thing I do know is when I see someone quitting on their team. You can call it mental health or personal reasons but if you went to Japan to compete and you don't because you just didn't feel like it, that's called quitting. Quitting didn't change her status in the history of the sport. It didn't take away any of the medals she's won in the past. At that moment, can we call it what it was someone who didn't want to compete and she quit. SOME people say she has the right to walk away when she wants to. They are correct she can. The problem is she wasn't just going out there for herself she was going out there representing her team. So I ask THOSE people when is it not ok to quit? We are now experiencing the everyone gets a trophy generation. Is Simone Biles the poster child for all the kids who's parents didn't want to keep score because they didn't want their kid to feel like a loser.

Growing up, people with mental health issues did crazy shit like ran naked in the street or took a dump in a public place. They would yell pointless comments into the wind and everyone knew that person was just crazy fill in the blank. We all knew a crazy person growing up and if you didn't you were most likely that person. Crazy people or people with mental problems assault kids and shoot up schools. This current generation of athletes who would like us to focus on the mental health challenges they face as well as the physical ones will always fight an uphill battle. Choices bring pressure! Those choices can occur at work or in competition but the stress is no different. The stress of putting food on the table is just as tough for many people as Simones. Athletes looking for an understanding of mental health will always find another opponent who thinks they need to fight through it. I'm not ashamed to say that I'm one of those people. If you want success without the stress, do it on a PlayStation or Xbox. Success breeds exceptions and expectations bring stress and pressure to succeed. This goes without the endorsements and all the fan fair. Look, I believe she quit on her team and on the sport. I guess the question I have to get to the bottom of is when is it ok not to quit. Maybe that answer is entirely up to you?